2022 is shaping up to be another exciting year for Sammo Hung fans with Warriors Two and Prodigal Son this month and Skinny Tiger, Fatty Dragon set to follow in February.

In Warriors Two – which isn’t really a sequel if you’re wondering – Hung and the beautifully named Casanova Wong (who also has a cool nickname: The Human Tornado) play two students of southern kung expert Master Tsan. from China. fu style of Wing Chun.

Wong is Chan Wah, a cashier at the city bank. It’s convenient for the plot because the bank has just been taken over by a devious businessman called Mok who, backed by a gang of thugs, plans to take over the city of Foshan.

They first hatch a plan to kill the mayor, making his death look like an accident. Chan Wah overhears the plot being discussed and brings it to the attention of nosy official adviser Yau (Dean Shek). It’s unfortunate because Yau gets involved with the gang and forces Chan Wah to be killed. He narrowly survives Yau’s trap but is seriously injured and has to hide. When he discovers that Mok’s men have murdered his mother in an attempt to get him out, he swears to avenge her death. But first, he must hone his Wing Chun skills to stand a chance against the bad guys, along with his buddy Fat Chun (Sammo Hung, of course) and Master Tsan’s niece, Gam Fung.

The plot here was never going to win any awards for originality. It’s another revenge tale with a master/student relationship that ends in a battle between good and evil, but the action throughout is magnificent. Before and during filming, the actors underwent intensive training in Wing Chun, and it shows. Sammo inventively spins his training sequences with Chan Wah training with Fat Chun blindfolded, learning a variety of techniques that include “sticky hands” and even “coiling dragon form,” which we might call a kick in the ass. He even learns how to crack open an olive pit using a six-and-a-half-point angler’s pole, though I’m not sure how much that was really necessary.

The fights are even better. Bryan ‘Beardy’ Leung stars as Tsan, particularly during an epic teahouse brawl (which has a good twist, one of them), while Casanova Wong demonstrates his considerable talents right from the start. opening credits sequence, culminating in him performing a jaw-dropping kick as the film nears its climax, jumping over a table, rotating his body 360 degrees as he does so, to land a fearsome strike on his opponent. You might just find yourself rewinding to watch this again and again. 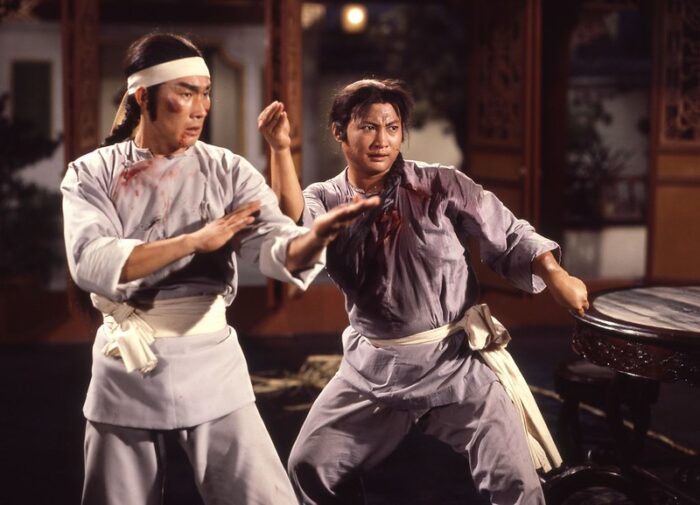 Three years after filming Warriors Two, Sammo returned to the character of Leung Tsan, with Yuen Biao portraying a youthful version of him. A spoiled rich kid, Tsan initially fancies himself a jaw-dropping fighting machine unaware that his father has paid a lucky streak to lose against him.

He learns a hard lesson during a confrontation with an adversary Leung Yee-tai (Lam Ching-ying), who refused to accept a bribe. An asthmatic who performs as a woman in traveling Peking Opera shows, he easily beats Tsan between rehearsals of a song for the show and lets him know what’s going on behind his back, taunting him on the makes his kung fu “really suck”.

Disheartened, Tsan vows to devote himself to perfecting Wing Chun and proving himself to be a truly great martial artist. To achieve this goal, he must find a master to do an apprenticeship and who better than Leung Yee-tai?

When the pair meet another spoiled rich kid who challenges Yee-tai to a fight, there are going to be unintended and brutally violent consequences for each of the men.

Arguably, The Prodigal Son has a better reputation than Warriors Two among Hong Kong moviegoers, but I preferred the earlier film. The comedic capers start off promising here – the first thirty minutes or so are mostly great fun – but as the plot progressed, interludes like Sammo demonstrating his mad kung fu calligraphy to his chubby daughter Twiggy sat uncomfortably, immediately following a spooky episode where ninjas gather for a late-night slaughter.

The action choreography, however, is exquisite and won an award at the 2nd Hong Kong Film Awards, with the burning flag scene being one of many highlights. Yuen Biao and Frankie Chan are both in great shape, but Lam Ching-ying is the best of them all, his performance rivaling that of his more famous turn in Mr Vampire.

All the words of Jamie Havlin. Jamie has written a few short films which have screened on UK TV and at international festivals. He is a regular contributor to the glam rock fanzine Wired Up!

More of Jamie’s writings can be found in the archives of its author Louder Than War.